I wanted to use rhubarb to make a desert for a long time. The idea was to soften rhubarb a little, and to top it with soft meringue. The result, however, is not exactly what I intended to make. I had to change the direction several times, but the final dish was close enough to what I had in mind – soft pear in tart rhubarb sauce, baked with 2 different toppings –  honey meringue and apple frangipane.

Honey meringue was easy to make, but baking a reasonable period of time, did not result in a stable structure and when cooled down, meringue topping deflated substantially. It was fully cooked, soft and tasty, but it did not look like a thick layer of meringue made with sugar. I tried to make Swiss meringue, beating egg whites with gentle heating in a water bath. It was still too soft and not suitable for a desert which is not served immediately after it is prepared. It is possible to use honey meringue if you serve your desert within a short period after cooking, but I wanted a stable desert, being presentable even the next day, so I opted for another topping –  almond frangipane made with apple puree instead of butter. 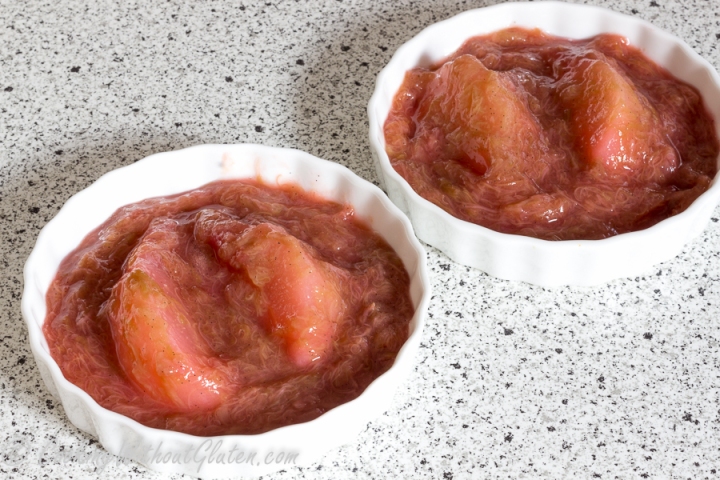 It can be seen clearly, that honey meringue is reduced in volume immediately after baking. However, it tasted very nice and flavoursome. All spices came through in the fruit layer and were better when  the desert was cold.

To make apple and frangipane topping:

Baking is better done when baking dishes are placed on the tray, some of the fruit layer can be spilled during baking. This pudding can be served warm or cold. The only remark I will make is about rhubarb acidity. I expected it to be more tart and harder in cooking. I am glad that I added just a little honey, expecting to add more later, but it was not necessary.

In individual serving dishes this pudding is very forgiving and can be served with any extra toppings, such as whipped coconut cream. Enjoy!

And if you are curious about a biscotti in the first photo, I can report that I am working on final touches to the recipe I have selected as more promising. Have a peek.